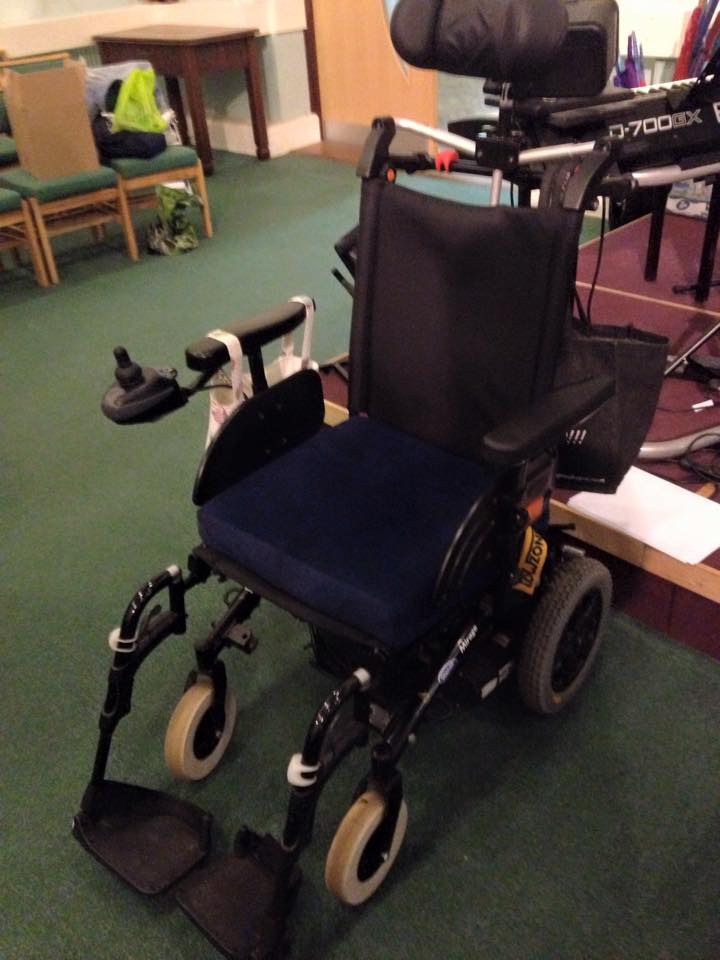 :ENGLAND JULY 14, 2015
“This is absolutely true!! Zoe has been at our church for more than 10 years now and she’s been wheelchair bound for as long as I remember. It was absolutely incredible to see her walking around and smiling on Sunday morning!! She didn’t even walk weakly (as one would expect if she has been unable to walk for a very long time) – she was literally walking with a ‘spring in her step’! Praise Jesus for miracles that still happen today!”

This morning I met an 85 year old woman who’d had polio at birth. She’d never had movement in her right ankle or been able to extend her right arm to lift anything. Today her short right leg grew out, she discovered she could raise and lower her ankle for the first time EVER, and she went up and down stairs without support. I’m in love with the look on her face as her ankle made all the complicated, pain-free movements it took to descend a flight of stairs! Then she found she could lift a water bottle and move her arm in full rotation! God didn’t see her as too old for a miracle!!

Chuck Parry was in Thun, Switzerland.
April 7, 2015
ONE WUNDER

This is Doris. She had cancer and they could do nothing for her. Her doctor said she needed a miracle so he gave her a prescription for “One Wunder” (Miracle). This is his prescription. She got it!!

She did not die but lives and declares the glory of God wherever she goes! 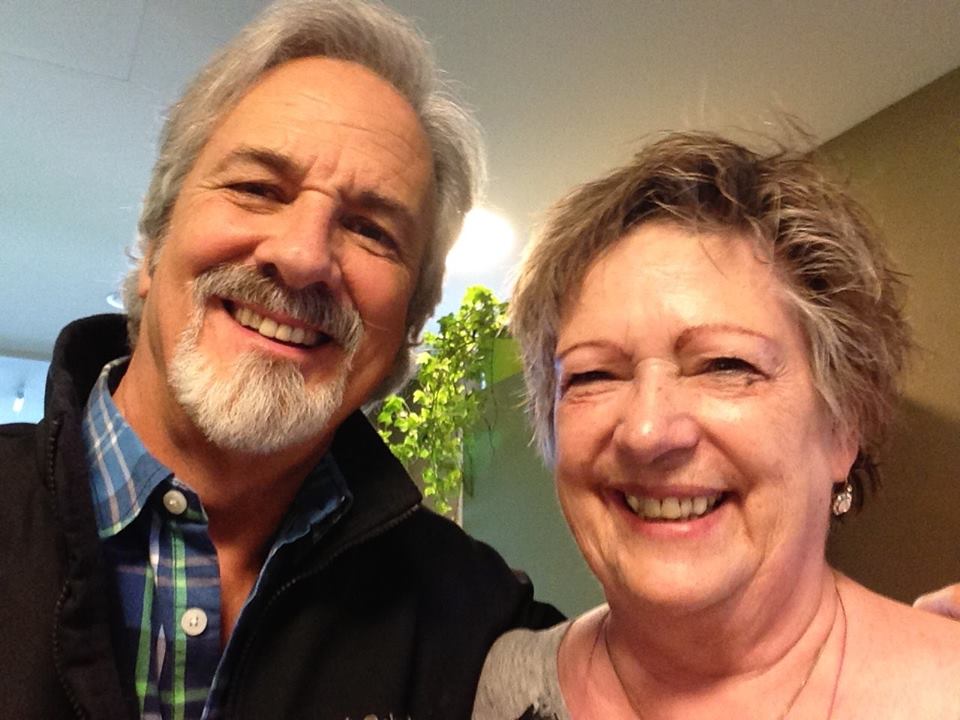 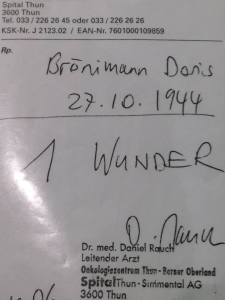 A woman walking out of the Healing Rooms with a cane was stopped by the children’s prayer team.  This was after she had received prayer and had not received healing so they prayed for her again.  They asked her if she would try to walk without the cane.  When she tried, she was amazed that she could manage even a little bit.  They prayed again and by the time they were done, she was walking out with the cane hanging on her shoulder.  It was no longer needed.

In March man was on his deathbed in Florida where he lives.  He had been sick for years from an autoimmune disease, retroperitoneal fibrosis.  Wasting away, he was down to 115 pounds and was being fed through a tube.  He had lost one kidney while the other kidney, his pancreas, and his lungs were all failing. Then he received prayer from one of our team over the phone.  At that time, he was in lot of pain but it all went away.  Every week since, he has changed for the better.  He has started eating on his own and has gained forty pounds, now weighing 155 pounds.  He is out of the hospital and has taken a road trip and is getting ready to go on another. He says,  “I feel like a teenager!”

In late January a man from Sweden jumped off the bridge into the river at Caldwell Park in Redding. The water was not deep enough so he injured his foot, leg, and knee. He tore all the ligaments in his ankle and some in his knee and broke the fibula bone in his leg.  His friends immediately prayed for his knee and it was healed.  He had surgery but now he has had no flexibility or mobility in his foot.  He works on it everyday to try to get it to move especially upwards but he has had little success.  Today, he came in using crutches to get around and as he was going down the corridor on his way to the first room, a prayer servant prayed for him. The swelling subsided, his flexibility returned, and he could walk on it without pain. He left today carrying his crutches as everyone celebrated.

A member of our ministry team had torn a muscle in the palm of her hand for the past four weeks. Part of the torn tissue balled up at the base of her fingers making an ugly bump there.  She has had many team members pray for her over the last weeks but the ugly bump still remained.  This week she reached down to speak grace over her hand and as she went to touch it she realized that the bump had at that moment disappeared.

A man from Tucson Arizona came for healing for the whole of the right side of his body, particularly his right shoulder, which had been tight his whole life because of birth trauma.  After receiving prayer he received alignment in his hip and the whole of his right side opened up.  His arms came into alignment where before they had been unequal because of the tightness in his right shoulder.  His right leg grew out.  His body is now completely re-aligned.

A woman came for healing for plugged ears, which she had had for five years.  She had surgery when she was eighteen and the tubes were kept in for three years. After receiving prayer her hearing became completely clear and unmuffled.

It was an SAS strike which caused all the cancellations and diversions in my schedule (I got to eat in 3 different Business Lounges in 3 countries), so the agent told me my checked luggage may not make it and gave me some paperwork if I needed to register a complaint. But I chose to pray… and guess what? When my bag didn’t come out with the others from my flight I asked an agent and he said: “I see it right there on carousel 6.” It had beaten me to London and was waiting for me. Thank You, Jesus!

From the Prayer Recipient:
A man from Cypress, TX had a lot of pain in both feet. The pain level was eight to ten. It was excruciating. He would have to massage his feet to get any comfort. The ministry team found him in the Healing Rooms. They had been looking for someone wearing a purple shirt who had foot problems. They also had a prophetic word for him about his life.  Now, all pain is gone!

A lady from England had a rotator cuff problem in her right shoulder for the past year. The pain level would usually be up to an eight. Now all pain is gone, and she has much better mobility. She couldn’t extend her arm horizontally, but now she can. She also felt a tremendous sense of peace come over her.

There was a man who called in over Skype who had a mass on his back. Now it’s completely gone.

February 22 · Pitt Meadows, Canada · One of the highlights of the weekend for me was going to the Bethel Healing Rooms Saturday morning. The really cool thing is for the last 3 year I haven’t been able to sleep flat, I had to sleep sitting up in a recliner to breathe properly, after receiving prayer Saturday morning I have been able to sleep in a bed again!!! I’m not totally healed yet I know God will finish what he started in me!!! Thank you God for being my healer!!!